This is an English translation of the report on the funding status of Japanese startups published by INITIAL in April this year.

Below are the main highlights:

The total amount of funding raised (and disclosed as of March 27, 2020) by Japanese startups in 2019 stood at USD 4.09 billion. This total represents a slight increase on the restated total recorded in 2018. This particular report will focus primarily on the highlights of funding trends within the Japanese startup ecosystem. For detailed information and comparisons, please refer to the full report (available in Japanese). 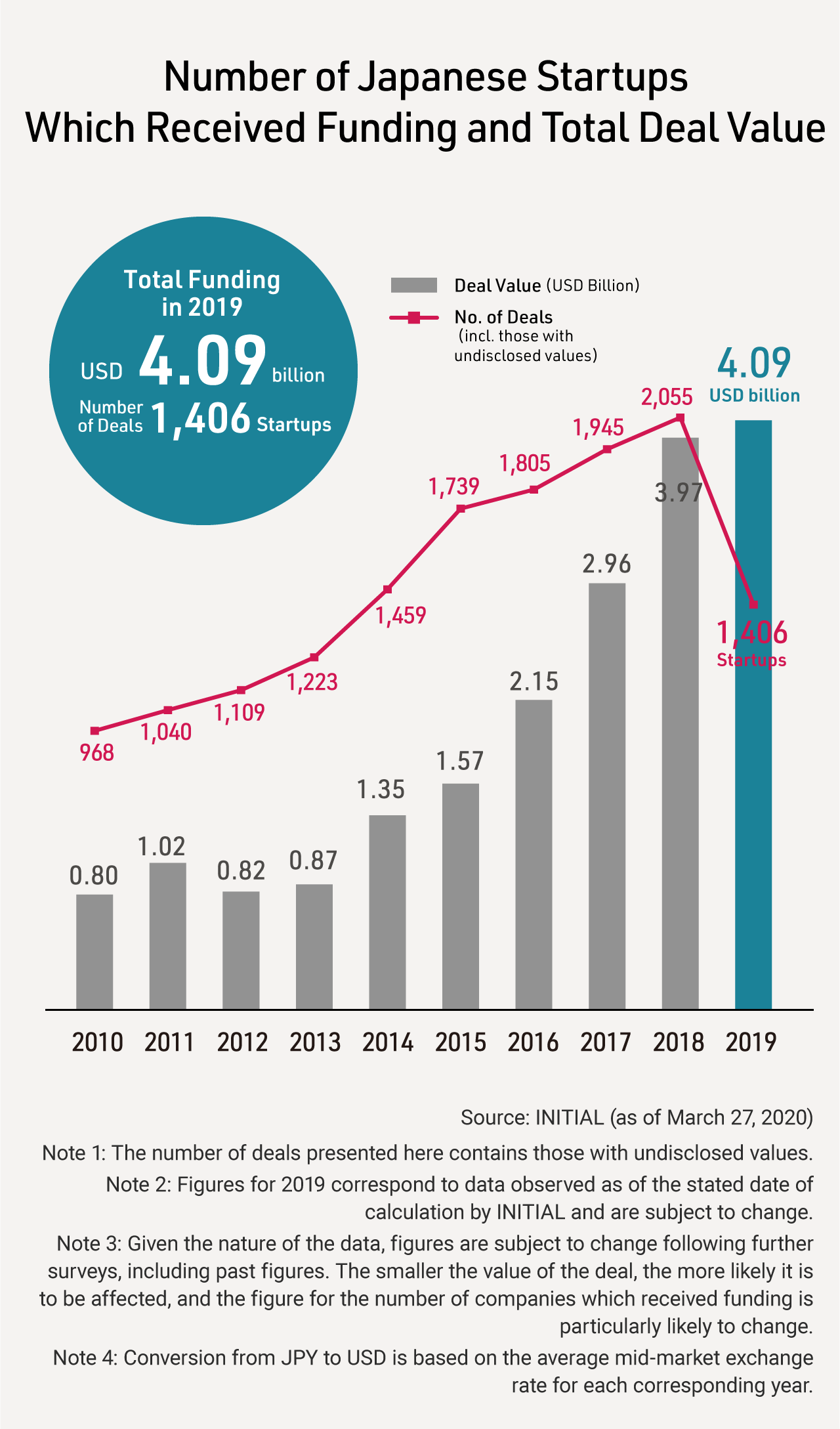 In 2018, the number of deals was initially recorded at 1,426 (as of February 21, 2019), and the figure increased by around 44% after full release. Given that the number of deals in 2019 (1,406) would appear to have fallen significantly from 2018, this figure is also likely to rise following the release of additional data.

Taking a closer look at the value of funds being raised by startups in Japan, the median value in 2019 was USD 1.03 million per deal. However, this figure will likely decrease upon the release of further information, as smaller-sized deals tend to take time to be released. Nevertheless, this is unlikely to have much of an impact on the continued rise in the median deal value being seen in Japan over recent years. 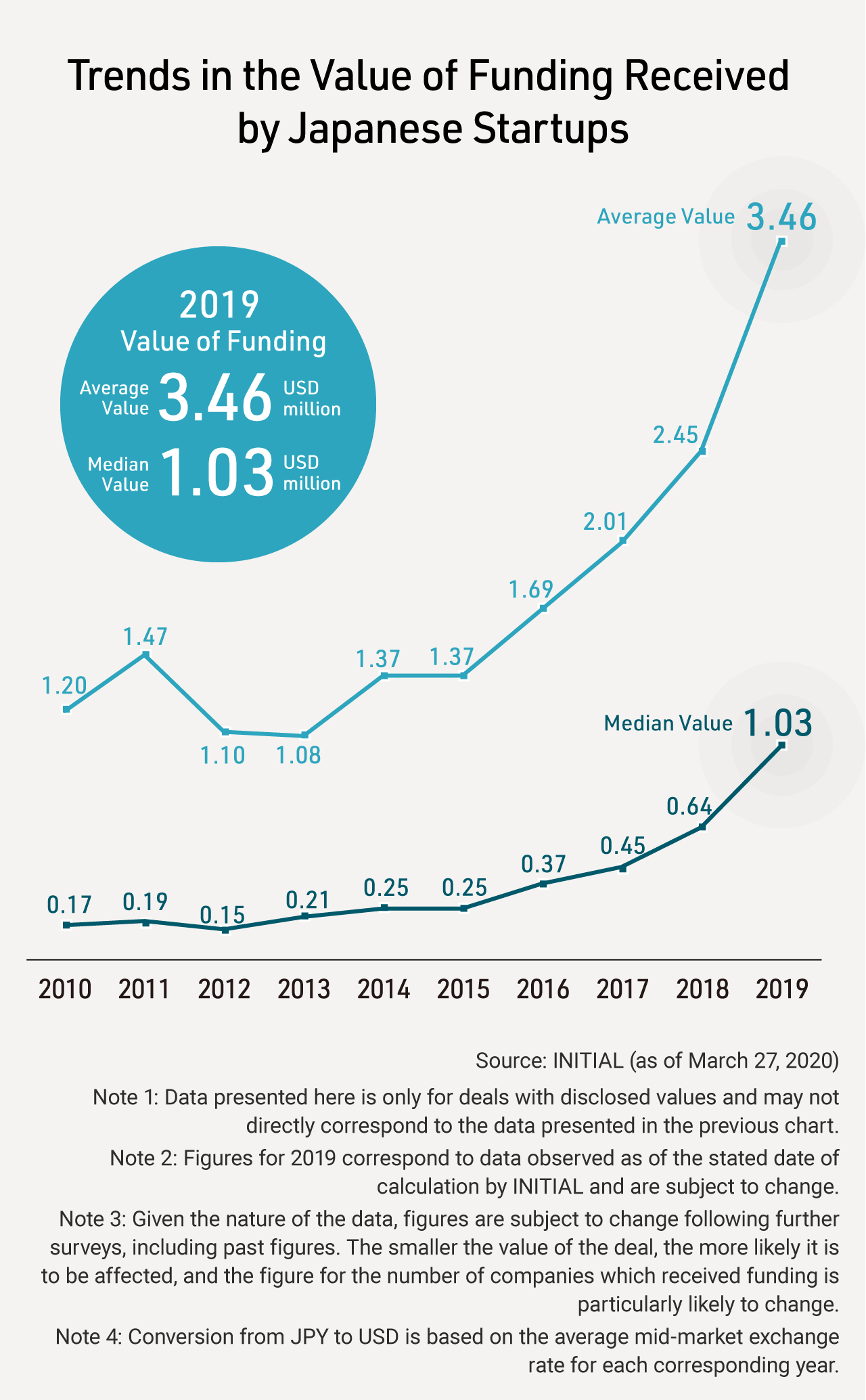 Breaking this trend down by the number of years since a company's establishment, companies that are more than five years old (in other words, later-stage startups) received particularly large-scale funding this year, demonstrating the same trend as in 2018. 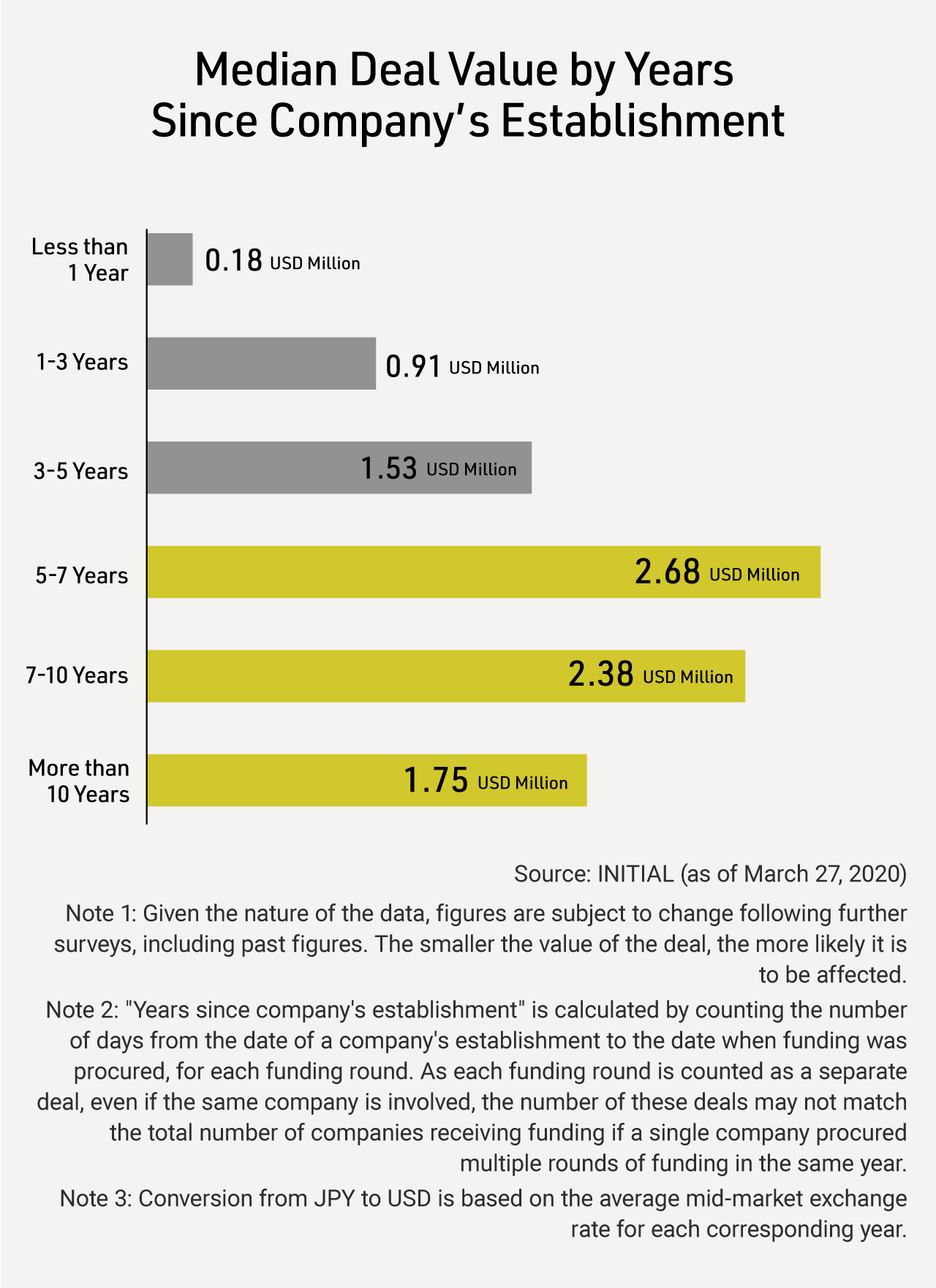 This trend is also apparent in the below list of the top 10 companies in terms of amount of funding raised in 2019.

It is worth noting that more than half of the companies in the above list raised more than JPY 5 billion (around USD 46 million) in funding. The largest amount was raised by news app developer SmartNews, Inc. at JPY 10 billion (*3), or around USD 92 million.

Very few funding rounds of JPY 10 billion and above have been observed by INITIAL. The most recent examples include Preferred Networks (investment from Toyota) and Scohia Pharma (established via joint investment from INCJ, Takeda Pharmaceutical, and Medipal) in 2017, and Mobility Technologies (formerly Japan Taxi; investment from Toyota and NTT Docomo) in 2018.

The aforementioned deals are all part of the general trend in Japan whereby large investments in startups are usually made by general business enterprises. Meanwhile, SmartNews is an exception in this case, as it has secured its significantly large funding mainly from VCs. This round of funding for SmartNews was led by ACA Investments, an investment company with bases in Singapore and Japan, which represents its first growth investment in Japan.

Looking at other entries in the above list of funding deals, both From Scratch (INITIAL "Series D") and SmartHR (INITIAL "Series C") are SaaS companies, which mainly attracted funding from large corporations. One notable characteristic of these two companies is that investors for both include overseas (non-Japanese) VCs investing in Japanese startups for the first time. 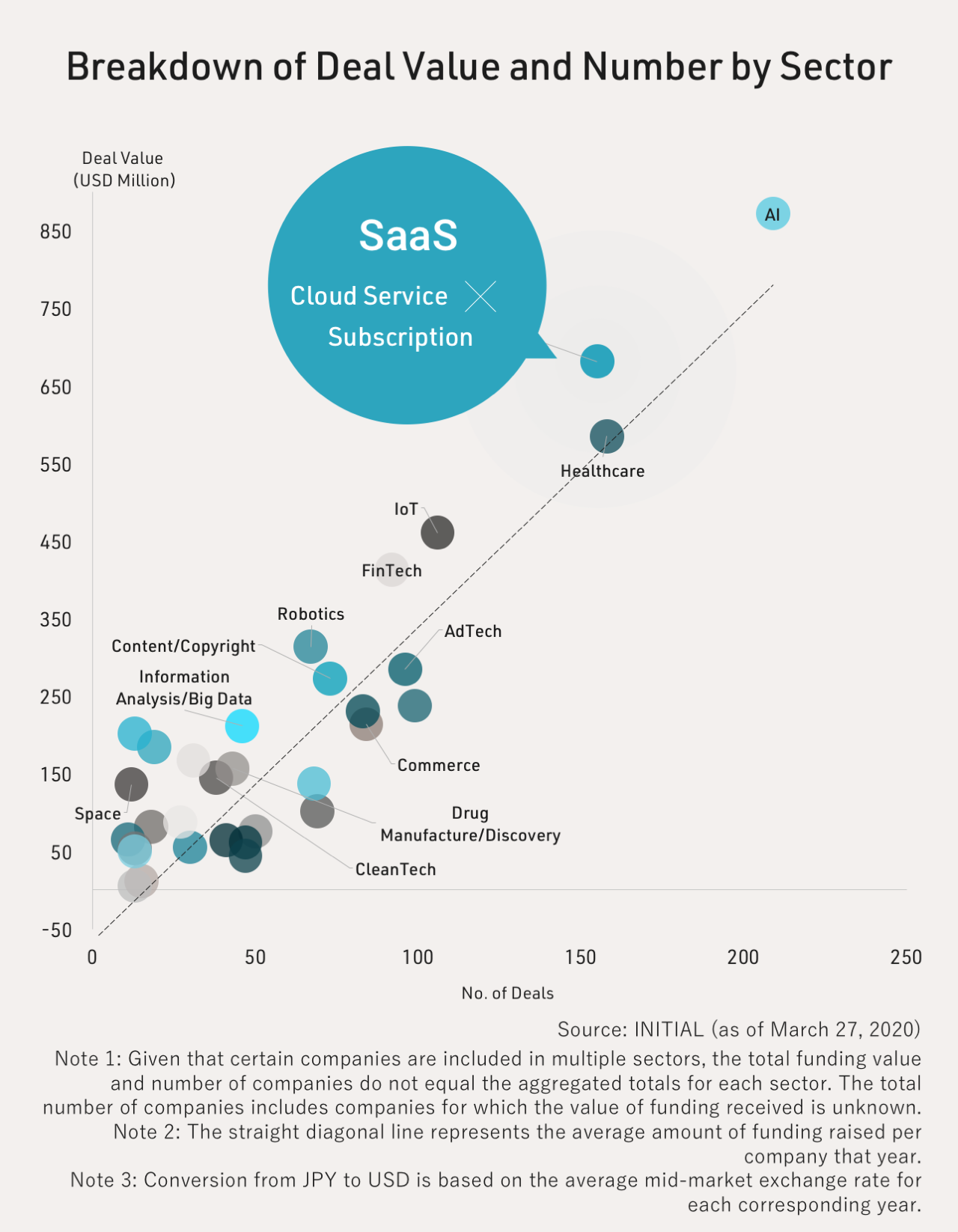 This investment trend is also evident when looking at the IPOs this year, where the top three startups (Sansan, freee, and Chatwork) are all SaaS (*4) companies. 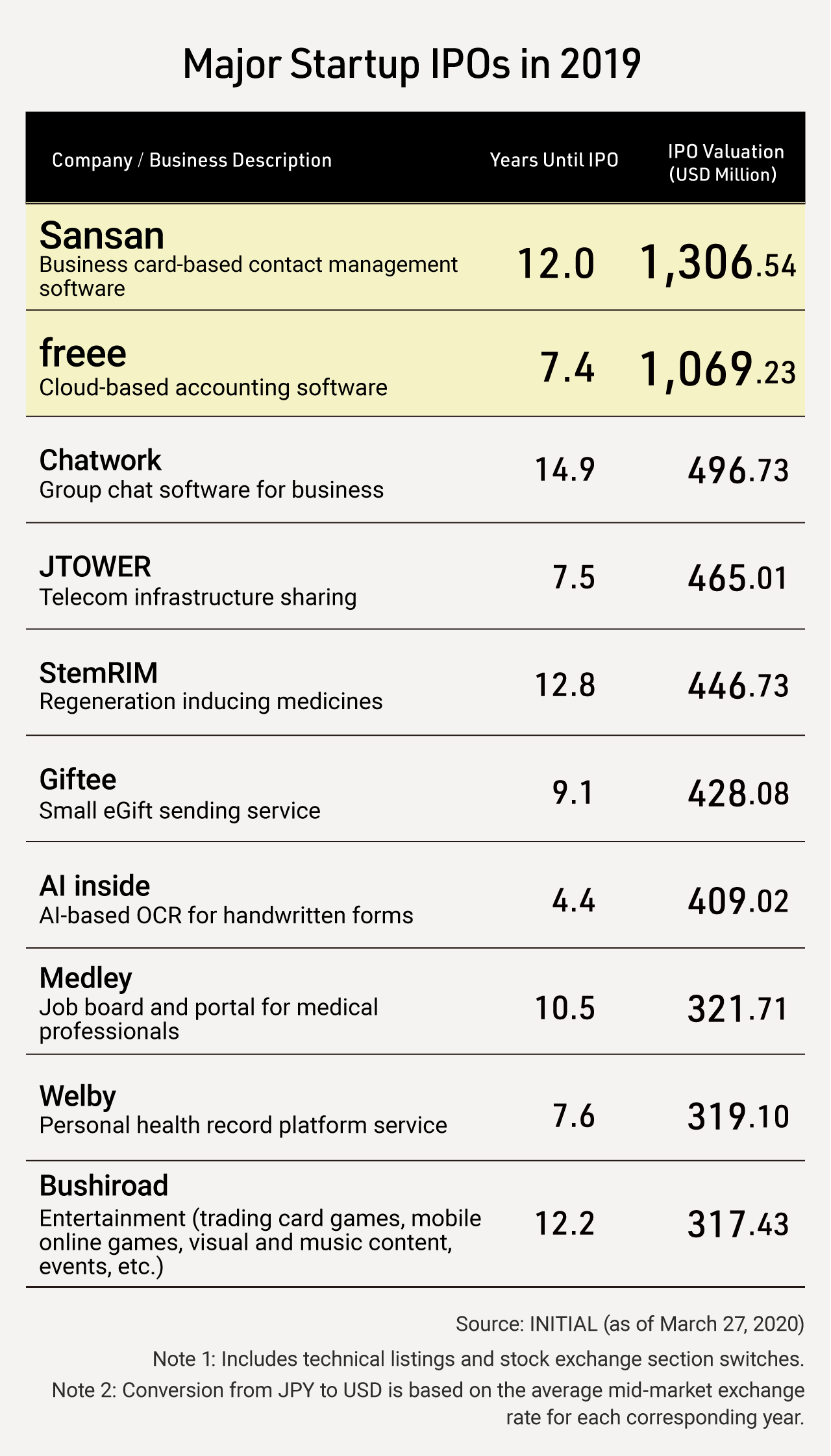 Commonalities between the top two, Sansan and freee, include the fact that they were both startups who engaged in later stage funding rounds in the private market before filing for an IPO, and that a significant percentage of their shares are held by investors outside of Japan. As a result, they were both also successful in carrying out large-scale IPOs valued at over JPY 100 billion (around USD 1 billion).

At the same time, as evident from the data above, there have been very few IPOs valued at over USD 1 billion involving companies who have engaged in later stage funding, with the next most recent example being Mercari back in 2018. Traditionally, startups would typically carry out IPOs after Series B or C rounds and reach a valuation of around JPY 10 billion (around USD 100 million). In other words, when opportunities to receive heavy investments while still in the private market were rare.

Based on the overall trends in terms of startup funding and the timing of their IPOs, we expect to continue to see cases of startups engaging in later stage fundraising going forward. This trend can also be seen on the investor side, with significant investments from VCs recorded in 2019 (*5,6). 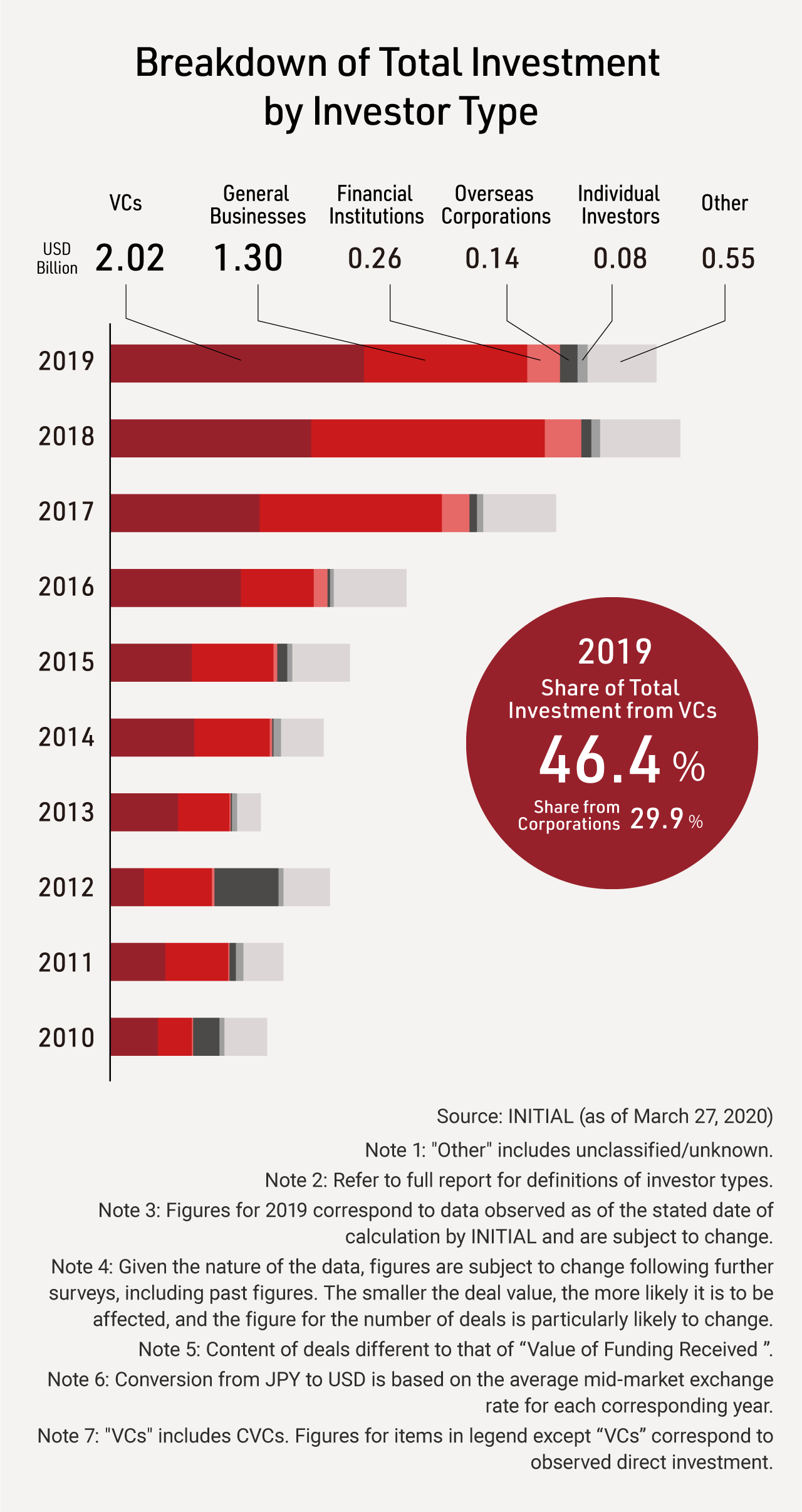 The primary factor behind this is large-scale investment from independent domestic and overseas VCs (figures disclosed in full report for INITIAL Enterprise members [Japanese only]).

In recent years, larger independent domestic VC funds have started to appear. Examples of such large-sized funds established in 2019 are JAFCO's SV6 Series (valued at around JPY 61.4 billion) and Globis Capital Partners' 6th fund (Globis VI - GFVI; around JPY 40 billion). The emergence of growth funds such as THE FUND (JPY 20 billion) is another indication of this trend.

No longer limited to players who have traditionally invested in Japanese startups such as DNX Ventures, DCM Ventures, Eight Roads Ventures Japan, and Salesforce Ventures, large-scale funding is now also being supported by new players such as PayPal Ventures, Light Street Capital, Tybourne Capital Management, and KKR, who used to primarily invest in general overseas companies and listed stocks.

On the investment side, direct investments made by general business corporations still account for a large proportion of startup funding. That said, general investment sentiment tends to be affected by the release of many companies’ financial statements in March. Therefore, future funding patterns could become polarized between investors who are fully committed to investment in startups and those who are not, with very few investors interested in both.

Given these developments, startup funding patterns are likely to become more polarized in the future, splitting between the cases when startups continue to attract heavy investments up until a later stage before going for an IPO (such as Sansan and freee), and the cases where startups are only able to receive small-scale funding—with few cases in the middle of the spectrum.

Finally, with the global outbreak of COVID-19 firmly in mind, we will take a look at the establishment of investment funds.

A total of 95 funds, valued at USD 3.86 billion, were established in 2019, an increase on the number recorded in 2018. While not all of these will necessarily focus on investments in Japan-based startups, it still indicates the fact that there is a certain amount of reserves, or “dry powder”, available for investment. 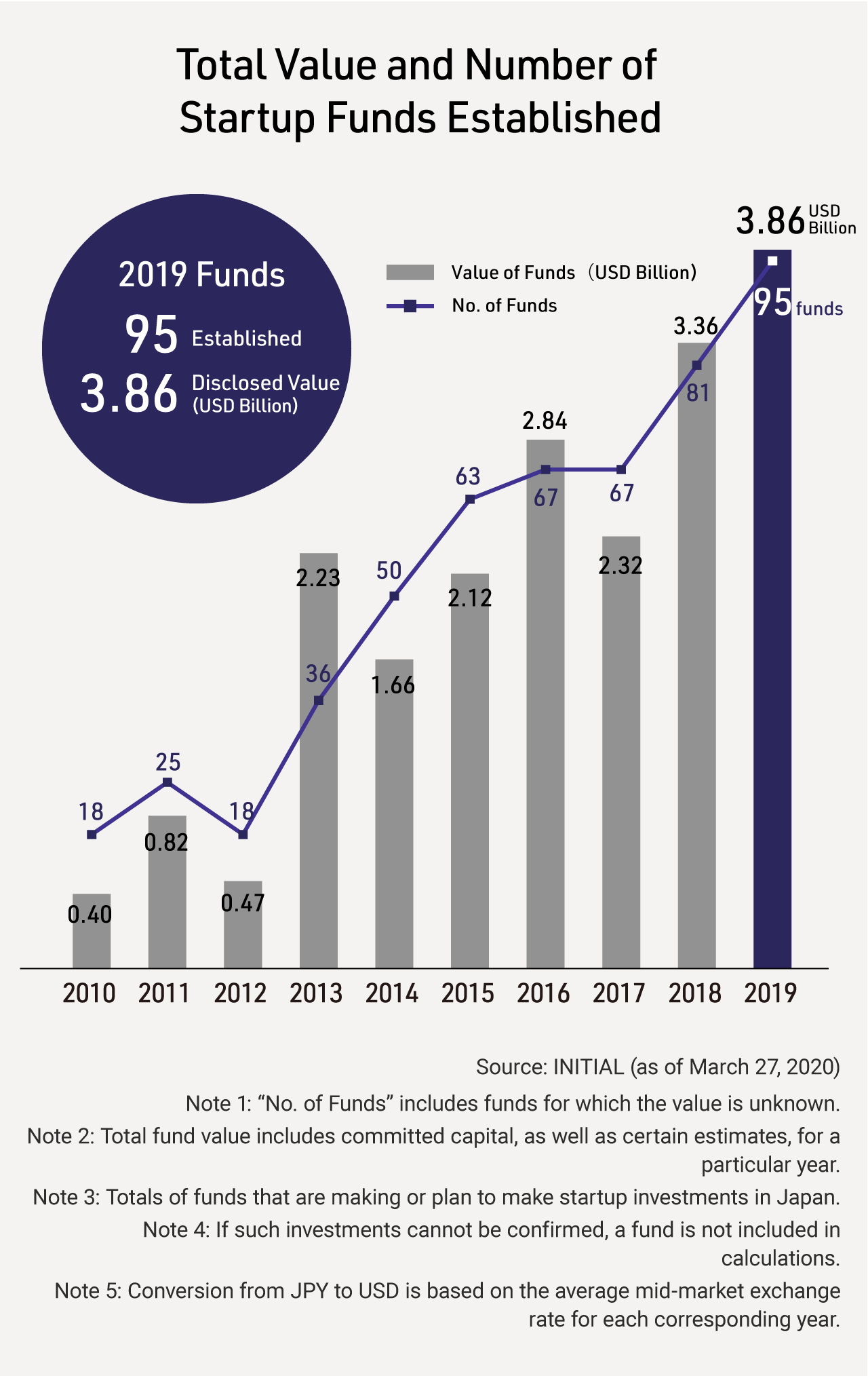 One point to be highlighted here is that the number of independent VCs establishing large-scale funds is on the rise.

In the last four to five years, the market environment in Japan has been favorable for startups, making it easier for them to attract investments.

However, there have also been concerns that the exceedingly high valuations were a sign of an overheated market. We believe that the aforementioned polarization will result in a certain settling down of startup valuations. Consequently, in areas where investment sentiment remains robust, the implementation of the Japanese government's so-called open innovation tax relief system in April 2020, as well as other initiatives, will likely drive further investment, including acquisitions.

It is our belief that this will exacerbate the current trend toward polarization, one in which already established and promising startups are raising significant amounts of money. If this trend—raising late stage funding in the private market and delaying IPOs as a result—were to continue over the long term, it is likely to influence the number of IPOs each year and, thus, boost the importance of acquisitions.

Overheated valuations have also had an effect on startups themselves, and they may not be able to raise as much funding as they have in the past. The importance of cost and cash management, as well as the formulation of concrete business plans, is also likely to rise.

Japan is approaching a critical phase in which startups will either firmly establish themselves as sustainable growth drivers of the country's economy or end up simply being a temporary boom.

As the global economy battles through its tumultuous present, the concept of value is also changing. It is our hope that startups remain in constant touch with this changing economic landscape and continue to deliver the information and innovation required to push the world forward.